He lived in a pavilion, under a thatched roof which rested on thick tree stumps so that it could not fall in when Kari bumped against the poles as he moved about. One of the first things Kari did was to save the life of a boy. Kari did not eat much but he nevertheless needed forty pounds of twigs a day to chew and play with. 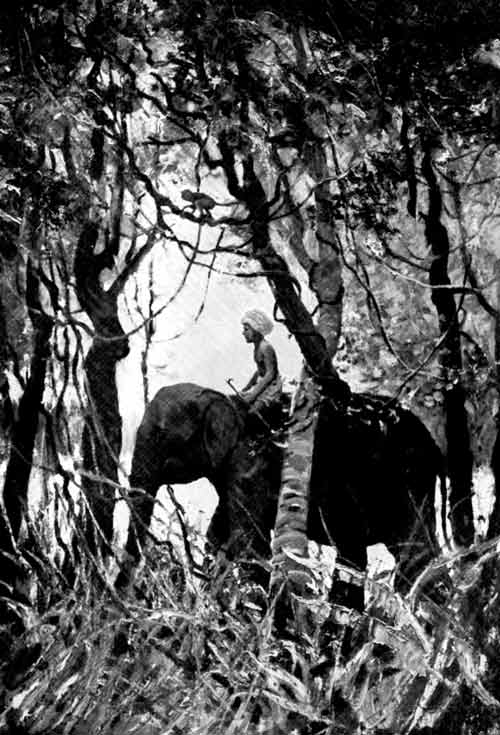 Every day I used to take him to the river in the morning for his bath. He would lie down on the sandbank while I rubbed him with the clean sand of the river for an hour. After that, he would lie in the water for a long time.

On coming out his skin would be shining like ebony, and he would squeal with pleasure as I rubbed water down his back. Then I would take him by the ear because that is the easiest way to lead an elephant, and leave him on the edge of the jungle while I went into the forest to get some luscious twigs for his dinner. One has to have a very sharp hatchet to cut down these twigs; it takes half an hour to sharpen the hatchet because if a twig is mutilated an elephant will not touch it. It was not an easy job to get twigs and saplings for Kari.

I had to climb all kinds of trees to get the most delicate and tender twigs. As he was very fond of the young branches of the banyan tree which grows like a cathedral of leaves and branches, I was gathering some, one spring day in March, when I suddenly heard Kari calling to me in the distance.

As he was still very young, the call was more like that of a baby than an elephant. I looked all over, but I could not find him. I went near the edge of the water, and I saw a black something struggling above its surface.

Then it rose higher and it was the trunk of my elephant. I thought he was drowning. I was helpless because I could not jump into the water and save the four hundred pounds of him since he was much higher than I. But I saw his back rise above the water and the moment he caught my eye, he began to trumpet and struggle up to the shore. Then, still trumpeting, he pushed me into the water and, as I fell into the stream, I saw a boy lying flat on the bottom of the river.

He had not altogether touched bottom but was somewhat afloat.

I came to the surface of the water to take my breath and there Kari was standing, his feet planted in the sand bank and his trunk stretched out like a hand waiting for mine. I dived down again and pulled the body of the drowning boy to the surface but, not being a good swimmer, I could not swim ashore and the slow current was already dragging me down. Seeing us drift by in the current, Kari, who was usually slow and ponderous, suddenly darted down like a hawk and came halfway into the water where I saw him stretch out his trunk again.

I raised up my hand to catch it and it slipped.

I stopped the elephant again and said to the man, "Why art thou irate when the evening is so cool, little man of the city? Even the saplings were tense, and you could almost hear the cracking of the muscles of the animals holding themselves to- gether and watching which way the tiger would pass. The noise grew louder and louder and I could feel a vast warm tongue licking the cool silence of the night. He did not stop till he reached the open ground which we had left half an hour before. The beaters cried out again close by, but all were silenced by the roar of the approaching tiger. That instant a shiver went through the herd; the stag stamped his foot on the ground and as swiftly as the waving of a blade of grass in the breeze they all disappeared in the forest. I found myself going under the water again, but this time I found that the water was not very deep so I sank to the bot- tom of the river and doubled my feet under me and then suddenly kicked the river bed and so shot upwards like an arrow, in spite of the fact tha f I was holding the drowning boy with my hand.

I found myself going under the water again, but 10An Alien Hand this time I found that the water was not very deep so I sank to the bottom of the river and doubled my feet under me and then suddenly kicked the river bed and so shot upwards like an arrow, in spite of the fact that I was holding the drowning boy with my hand. As my body rose above the water, I felt a lasso around my neck.

This frightened me; I thought some water animal was going to swallow me. I heard Kari squealing, and I knew it was his trunk about my neck. He pulled us both ashore. Kari was like a baby. He had to be trained to be good and if you did not tell him when he was naughty, he was up to more mischief than ever. For instance, one day, somebody gave him some bananas to eat.

Very soon he developed a great love for ripe bananas. Financial constraints and his political radicalism made him move on to Stanford University, from where he earned a graduate degree in metaphysics in In the s, Mukerji moved to New York and began his most prolific period of writing. Reviews from Goodreads. FictionDB Reviews:. Paperback editions:.